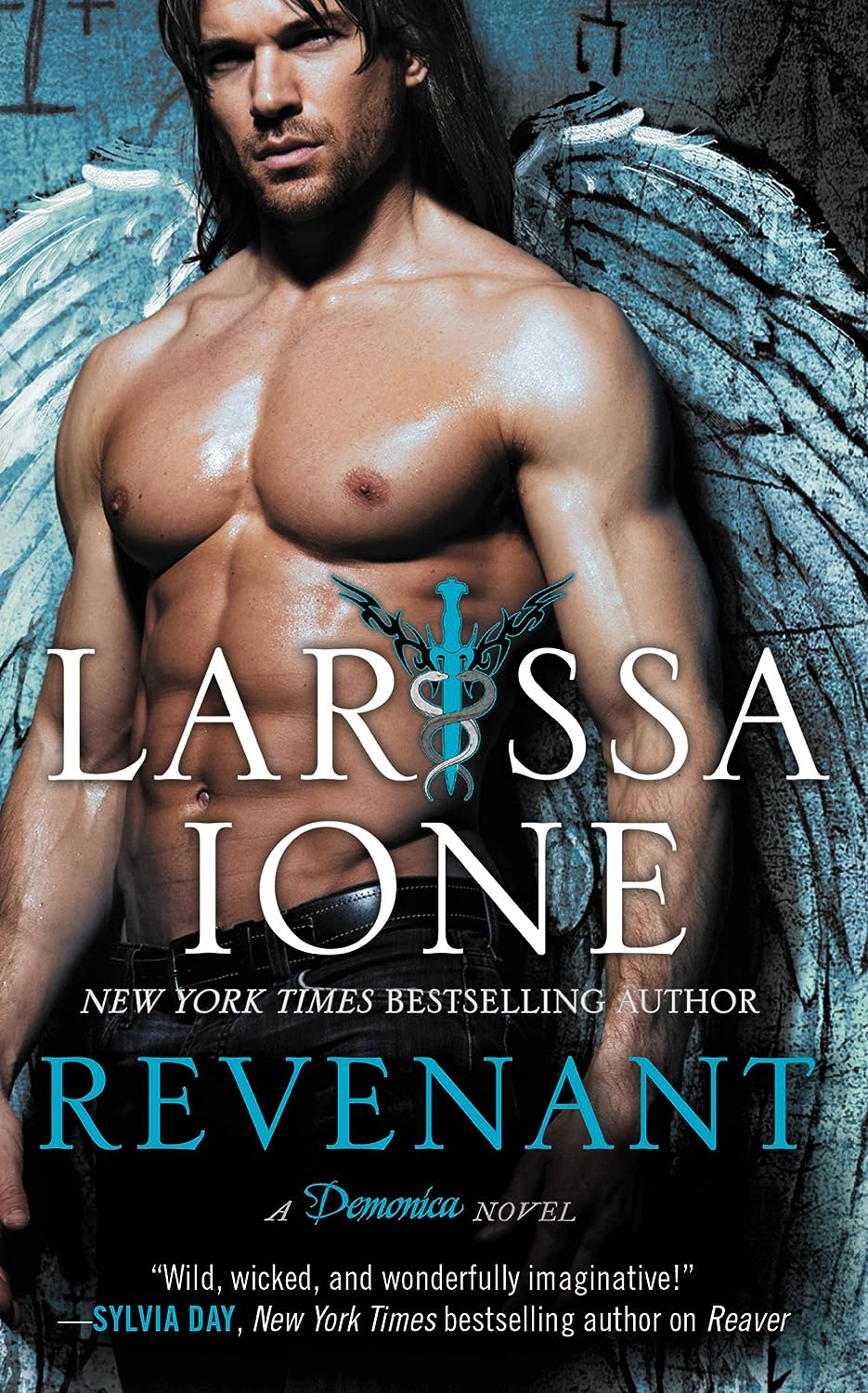 For five thousand years, Revenant believed he was alone in the world, a fallen angel beyond any redemption. Now he finds he has a twin brother who had all the light and love Revenant was denied. Caught in a tug of war between Heaven and Hell, he must weigh his thirst for revenge against his desire for a mysterious female named Blaspheme-a female whose very origins could deliver him into salvation . . . or destruction.

Blaspheme has a deadly secret: she's the forbidden offspring of an angel and a fallen angel. Hunted by both heavenly and satanic forces, she has survived only by laying low and trusting no one. When Revenant claims he can save them both, how can she possibly believe him? But the powerful angel is persistence incarnate and for Blaspheme, there's no place she can hide in Heaven or Hell where he won't find her . . .

YES!!!! My wish that a certain Archangel gets what he damn well deserves has been fulfilled although I must be honest and admit that I could’ve dealt with seeing a bit more of what is going to completely happen to him.  This was a wonderful story of a hero that isn’t 100% sure of his place and a heroine that has always been in hiding living a life that really isn’t hers.

I loved how we got to see both our beloved Reaver and Harvester in this book but it was definitely about Revenant and his beloved Blaspheme.  These two are so strong that you can’t help but love when they start to let down their walls with each other.  They both have issues from childhood and knowing where they belong as both of them have known nothing but fear and pain in the years that formed them.

Blaspheme has lived her entire life afraid that if anyone ever found out what she truly was that she’d be hunted and killed.  She’s understandably upset when Revenant starts to notice her and while she finds she’s drawn to him she knows it can go nowhere.  She’s got a lot of heart and loves her job at Underworld General but she’s always on guard and as her spell starts to wear off she is forced to start to deal with what to do now.  She’s also put in the position to potentially do something about Gethel but at her core she isn’t a warrior who can kill but a healer who wants nothing more than to help those in need.  I loved how she let people in even as it meant that she could be betrayed at any second.  She truly wants to belong even as she knows that her secret not only is her death warrant but it could kill those closest to her.

Revenant… nummy nummy Revenant.  I adored this cocky, broken soul even as I wanted to slap him for being such an ass.  He’s something else and as you get to know more about him you will want nothing more than to cuddle and protect him (well and ummmmmm  spend some quality time getting to know him in a “biblical” fashion *heh*) as he wasn’t given the best upbringing in the world.  He’s at his core a good man and seeing him realize this with the help of Blaspheme was wonderful.  He really did get the short end of the stick in many ways but as he discovers he got something his brother didn’t, time with their mother even as painful as it was.

This story was not an easy one and you really do need to have the backstory to fully appreciate it but I adored seeing everyone again even in the midst of this drama.  There is something about seeing the love story develop but also seeing the relationship between a family start to click in place that makes me very happy.  Revenant and Reaver may not ever be completely able to not fight each other but there is a bonding that happens in this book that makes it distinctly less volatile and healthier.

Special thanks to NetGalley.com and Grand Central Publishing for the chance to read this book.

Queen Of The UnknownThe tales tell of three sisters, daughters of the high king. The eldest, a valiant warrior-woman, heir to the kingdom. The youngest, the sweet beauty with her Prince Charming. No one says much about the middle princess, Andromeda. Andi, the other one. Andi doesn't mind being invisible. She enjoys the company of her horse more than court, and she has a way of blending into the shadows. Until the day she meets a strange man riding, who keeps company with wolves and ravens, who rules a land of shapeshifters and demons. A country she'd thought was no more than legend--until he claims her as its queen. In a moment everything changes: Her father, the wise king, becomes a warlord, suspicious and strategic. Whispers call her dead mother a traitor and a witch. Andi doesn't know if her own instincts can be trusted, as visions appear to her and her body begins to rebel. For Andi, the time to learn her true nature has come. . .

I have to say I adored this book and love that it is the first in a trilogy.  The world that was built was fascinating in its complexity and beauty yet harsh in its way of dealing with the the differences between races.  There is a lesson embedded in this story about tolerance and understanding needing to take the place of fear and the unknown.

We meet three sisters who are as different from one another as they can be but this story focuses on the middle child who has spent her life invisible to those around the throne until a fateful day when her life changes and she becomes something/someone to notice and either fear or love.  Andromeda is content in many ways to stay in the shadows but when she happens upon a man who says strange things to her about being his and more than she knows she is… her life will never be the same.  She’s surprisingly strong and while her nature is to be out exploring and in the wilds around the castle her father and sisters keep her grounded to the castle and try to make her in to something.  She never feels like she is good enough but when she does choose to actually come out of her shell the things she decides are ultimately the best course of action.  I liked her strength and the way she fought against the thoughts of others to ultimately make her own path in life even as it felt to her like she was betraying everyone in her family.  She really was being true to not only herself but to her family and those she loves with all of her heart.  Watching her come in to her own and truly embrace her unique heritage was beautiful and I look forward to seeing how this plays out in the other two stories.

Rayfe.. *sigh* such a wonderful man to get to know as slowly yet quickly as Andi gets to.  I loved seeing this strong man not only be patient with Andi but also watch him be so tender with her at times when she really didn’t seem to appreciate it.  He didn’t know when he first approached how little she actually knew about her heritage but also didn’t have all the time to make sure she didn’t feel rushed in accepting her new role in life.  He’s sexy as hell and while Andi put up a good front with others we knew she’d fallen for him the moment she met this incredible man.  He’s suffered for years in order to do what was best for his people and seeing him finally get the happiness he deserved made me smile.  He’s highly intelligent and driven to restore his people to their former strength and give them the safe haven they deserve but luckily for him he found his true mate in Andi.

My interest is piqued by how Jeffe is going to manage to get me to love the youngest spoiled brat of a sister but I trust her to open her up and let us see something other than a brat in her story.  I loved the older sister even as I scowled at her because as you’ll see she is hiding a lot from the world which means peeling back the layers will prove to be highly entertaining.

Special thanks to NetGalley.com and Kensington for giving me the chance to read this in exchange for my honest review.  I loved it!!  Also thanks to Jeffe for saving me a copy at RT…  It is on my keeper shelf along with a beautiful snow globe of the title.