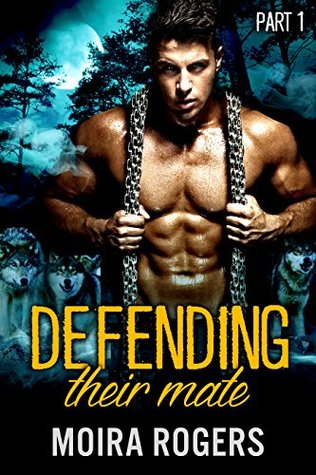 It's been three months since her new pack saved Grace from captivity. They're everything she never knew to expect as a werewolf--loyal, devoted, and fiercely protective. But her peace of mind is threatened by the arrival of her mating fever--and the crushing desire it brings.

The last time she went into heat, her wolf would accept none of her captors, and the thwarted need almost drove her mad. Now, she finds herself drawn to two very different wolves. Connor's easy, affectionate nature makes her feel worshiped, sheltered. And Mac's inner darkness calls to her own feral cravings...

Tragedy has left Mac emotionally locked away, unwilling to take a mate. It doesn't matter that Grace sparks lust as well as his instincts. He'll keep her safe, defend her--with his life, if necessary. But he can't risk his heart.

Control over his wolf is all that matters to Connor--until Grace. But claiming the beauty is anything but simple. Falling for her could shatter the bond he shares with Mac, and cost him everything that's kept him sane.

When Grace goes into heat, all bets are off. Because only one thing matters--soothing her fever.

NOTE: Previously published as Defending their Mate Part One & Part Two as Mia Thorne. Though the stories have been reissued, the content is unchanged.

This being said I appreciated seeing Grace start to come to terms with who she is and what she needs.  I also appreciated that Mac and Connor are both struggling with what they want and need versus what they think the other two are thinking.  Grace is coming in to heat which means she believes she needs to leave before she hurts people.  She’s afraid but the time she spends around Mac grounds her in a way she didn’t know was possible.

This story is a very short start but as with the last book – Protecting Their Mate – the story is meant to develop over multiple installments.  I appreciated the view of the struggles being experienced between each party as they interact but also how they try to figure out who they actually are and what they need/want.  You think you know but the struggles Mac, Grace and Connor are facing could prove too difficult to overcome if they don’t talk to each other.

Grace doesn’t fully trust her instincts and knows she’s strong.  This makes her scared to fully let loose as she doesn’t think that the others can handle her but Mac shows her that not only can he handle her… he can push her to heights that she didn’t think she could reach.  She also is shown that her wolf can have fun by just being able to run with a partner and no restraints.

Connor has a damaged wolf.  He also has an interesting relationship with Mac where he allows himself to be ordered by the older man which provides his wolf with a level of comfort.  The fact that he wants Grace complicates things because he knows Mac wants her as well.  There is a dynamic of extreme trust and devotion between the two men which is hot as hell but isn’t one of them wanting each other sexually.  They just compliment each others needs in a way that they don’t completely understand.

Mac…  now Mac has interested me since the last book… I want to know all his secrets and am looking forward to the rest of this book.  He’s going to be a hard one to let his walls down and trust what he’s feeling with the two of them.  I love his ability to sense what the other two need and how he doesn’t force things to go his way.  He is very in tune with his pack but especially Grace and Connor.  There is a huge sense of honor and duty to him but that is what will cause the pain that we know will be coming in future installments.

While this one wasn’t perfect it is part one but I look forward to reading the next installment so I can learn how these three damaged souls find happiness.