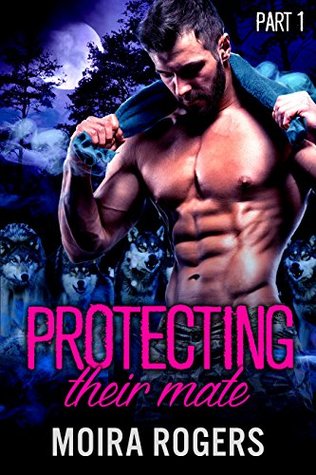 Protecting Their Mate (Part One) on July 24, 2017
Format: eBook
Source: the Author
Buy on Amazon
Goodreads

Part One (of Three)

Blake is on a mission from his alpha--to track down a werewolf whose parents dragged her into the human world years ago, one who may be in danger. He expects the lead to go nowhere, given how few wolves live among humans, but he discovers something rare indeed, caged in a basement: a beautiful, curvy woman gripped by the fever, ready to mate.

Ashley Todd has never fit in. She's always been too much--too big, too demanding, too aware of the wolf hiding beneath her skin. She's been locked away for months--been alone for a lifetime--and in walks Blake to save her from her prison. Her rescuer is hard, intense--a dominant wolf whose bossy attitude makes her growl...and yearn to submit.

Soothing Ashley's mating fever is Blake's responsibility--and his pleasure. Their passion is explosive, undeniable. But what started out as a job for Blake quickly becomes something more, and the toughest part of his mission looms: taking Ashley back to his pack so she can choose her permanent mate from amongst his brethren.

Ashley is drawn to dominant Blake, but meeting the rest of the pack reignites her desire. She is overwhelmed by her new life and all it entails, but embracing her inner wolf means embracing the truth: if she doesn't explore her attraction to the other members of the pack, she'll never find her forever mate .

Imagine living a life where your fundamental nature was considered foul and needed to be suppressed.  This is reality for Ashley who has been locked in the basement of her family home by her father.  He is what she is which is a werewolf but has gone insane so doesn’t feel that his very nature should be considered acceptable and living as a human is the goal.

Ashley has finally hit her limit and is trying to escape while in heat when she hears someone trying to get to her and smells the scent of death.  She is relieved to be free but at the same time conflicted by the fact she’s always been told she wasn’t right.  She misses her family but the new life she is going to be building is so right for her and I enjoyed watching her bloom under the attentions of some seriously yummy males.

This first installment introduces us to the main members of the pack but focusing on the potential bond between Blake and Ashley.  Blake wants to make sure that Ashley has a choice in what she wants and needs so she knows she’s free compared to her past.  He’s strong and definitely wants her but makes sure that her needs in the midst of the mating fever are taken care of by the pack.  I loved Blake but also loved her interactions with Mac and the other packmates.

I’d like to say that this is on par with my love for the O’Kane series but this first installment left me a bit shaky as I wanted to get more time of Ashley and Blake getting to know one another before we had her with others.  I know I know… just me being a bit greedy.  LOL