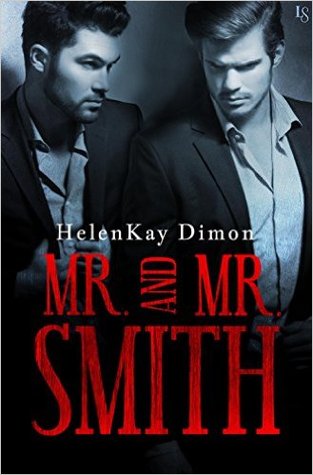 Secrets and seduction make for an explosive combination in HelenKay Dimon’s edgy, thrilling new series, which kicks off with a novel about two men who can handle any threat—except the one posed by desire.

Fisher Braun knows how to keep a secret. As a covert paramilitary operative, his job—and his life—depends on it. He’s at the top of his game, ready for action and always in control. No enemy has ever brought him to his knees, but one lover has: Zachary Allen, the man currently sharing his bed. The perfect package of brains and brawn, Zach is someone worth coming home to, and Fisher hates keeping him in the dark about what he does. But the lies keep Zach safe. Until the day Fisher loses everything. . . .

Zachary Allen is no innocent civilian. Although he plays the tech geek, in reality he’s deep undercover for the CIA. In a horrible twist of fate, the criminal enterprise he’s infiltrated has set its sights on the man whose touch drives him wild. Zach would do anything for Fisher—except blow his own cover. Now, in order to save him, Zach must betray him first. And he needs Fisher to trust him with all his heart if they want to make it out alive.

Includes a special message from the editor, as well as an excerpt from another Loveswept title.

What do you get when you have two men who have an abundance of chemistry?  You get this book and all the sexy man on sexy man action that it contains.  All I have to say is “MORE MORE MORE CAN I HAZ MORE????”

We start by getting to see Fisher in the middle of his worst nightmare come to life.  He’s going to find out that what he thought was bad is infinitely so much worse than he could’ve ever imagined.  He’s such a hard soul to get to know but what this is hiding is a man who needs someone to just STAY.  He needs someone to love him for everything that he thinks he isn’t but is and show him that he can be their everything.  I loved how much he struggled with what happens but loved that HelenKay didn’t make him fold immediately.  We get to see someone truly struggle with what he feels, thinks he knows and projects on others around him because of his history.  His angst and struggle made everything hard on both men but honestly there wasn’t another way for this to play out.  If the struggle didn’t happen then nothing else would’ve worked.

Zach is having to do the one thing he never wanted to do but, like Fisher, he is struggling with his past.  He’s also struggling because he made a choice that has led to this breaking point even though there really wasn’t another way for this to go with who he is at his core.  You can feel how hard he just wants Fisher to listen to him, to believe him and to accept him but there’s also an undercurrent that he expects the worst.  His interactions with the team and Fisher will have you turning pages quickly because you want to know how this plays out.

The sexual tension between the men has a tendency to explode on the page which will keep you fanning yourself as you try to cool down but keep reading.  I also loved the storyline outside of the love story and need more about this especially H&W. *HINT HINT*  I mean if that gets told it’ll be something else because I think there is going to be an interesting twist there.  The whole idea of this organization existing even in its damaged state is something that will cause some havoc and seeing the team flush all of the rot out would be fun to read about.

Thank you to HelenKay and to her agent Laura Bradford because if Fisher and Zach didn’t make it to the page it would’ve been a great loss to readers.  These two were amazing to read!