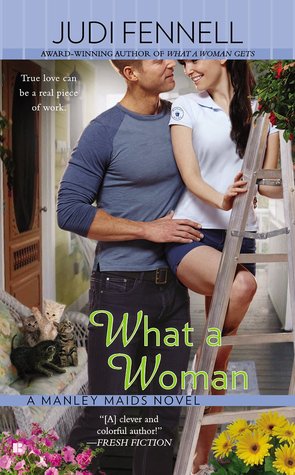 What A Woman Published by Berkley Publishing Group on March 3, 2015
Pages: 320
Format: Paperback
Source: the publisher
Buy on Amazon
Goodreads

After starting her housecleaning company, Manley Maids, one woman is determined to make it on her own. And what a woman she is…

Now that Mary-Alice Catherine Manley—Mac—has her hunky brothers working for her, she can sit back and watch the business roll in. But her new assignment quickly tosses that plan out the window. Mildred, her grandmother’s best friend, needs her house cleaned and Gran has volunteered Mac for the job. The problem is Mildred’s cocky grandson. He thinks Mac’s at his beck and call, but she has a few things to tell him…aside from how hot he is.

Jared Nolan is currently lying low, nursing some broken bones—and a bruised ego. The former professional baseball player let himself be used by woman once, and now it could rob him of his beloved career. No woman is ever going to call the shots again, which is why, when the bossy Mac shows up, he’s going to show her who’s really in charge. He’s just not prepared for the undeniable attraction between them. And with the two of them in one house, there’s no telling who will come out swinging…

Ok I was very very bad and started this series with the last book…  OOPS!  I will be going back to read the rest and don’t believe I suffered by starting late.  This was a sweet book of two people who have been meant for one another since they were kids but as many know you don’t always know what you’ve got until it’s gone or in theory buried.

Mac (Mary-Alice Catherine) loves her life and her business even if she had to learn how to count cards in order to make her brothers help her out for a bit in order to get some much needed publicity and growth for her new company.  She’s smart and extremely caring which is why she is bound and determined to not succumb to her childhood crush when she’s stuck with him as they clean out his grandma’s house.  She gets to spend time around him as he heals from a devastating injury but is not willing to let him walk all over her.  She pushes him to be more than he expected and will not let him get away with treating her or others like dirt no matter how much he protests.  I liked her willingness to do things for others without expectation of repayment but mainly liked her attitude of taking no prisoners.  She is who she is and she doesn’t hide it from anyone.  She wants a partner but isn’t in a huge hurry to find one as she really wants her cleaning business to take off.

Jared… sigh…  I have to admit that Jared made the book for me as he struggled with who he really was and this new appreciation for who Mac is.  He struggles with seeing her as a woman finally and also with his past treatment of her.  You get to see that while she wasn’t trying to ruin the good times for him and her brothers she really was being a pest.  Both of them get to see things thru the others eyes in this and it makes you/them appreciate what they have.  He finally gets answers as to why his parents are the way they are and it helps him discover who he really is and what will make him happy.  I liked his grouchy side and once we get a bigger picture as to what makes him tick you can appreciate why he struggles so hard with what Mac means to him.  He’s something else but I did want to hurt him when he pulls his stunt near the end of the book…  was it appropriate in some respects but dammit man communication is CRITICAL!!!

Overall this was a cute book about childhood nemesis (not really but will make sense when you read) finding true love where they didn’t expect it.

Now for the good news…  I’m giving away my finished copy that was used for reviewing this title.  All you need to do is comment below with either your first crush or your first enemy… Comment by 3/11/2015 at 11:59 pm CT in order to be entered.

One Response to “What A Woman – Judi Fennell – 4 stars – Contest”