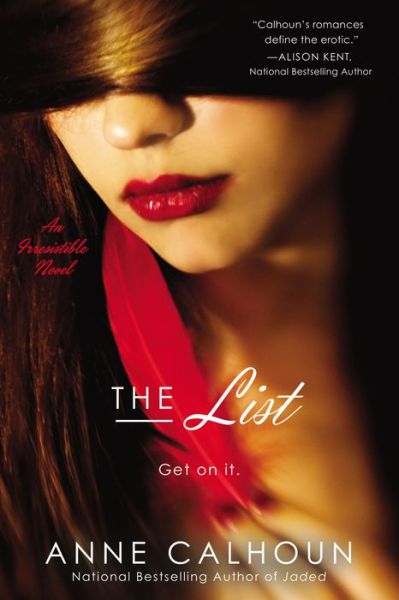 Matchmaker and stationery shop owner Matilda Davies brings people together. For those on her list, Tilda will find the man or woman of their dreams—whether it’s for an hour or a lifetime. But due to a painful past, the British expat has never put her own name on the list. Instead, she limits herself to emotionless and commitment-free hookups. Then she meets Daniel, who wants not just her body, but also her heart…

Daniel Logan hides the soul of a poet under the suit and tie of an FBI agent. Specializing in financial crimes, he pieces together stories of greed and ensures justice is done. He plays by the rules—until he meets Tilda. He’s drawn in by her passion as well as her mysteriousness. Daniel knows that no matter her secrets, he’s the perfect match for Tilda. But even pleasure doesn’t come with a guarantee…

Ok bear with me for a few…  This isn’t an easy book to read or review in some respects.  You need to be patient as you read this as you might be tempted to dislike the heroine but give her a chance.  She’s who she is because of where she came from and what she had to deal with growing up.  I found myself understanding her in many ways because I could see myself in her ways of protecting herself from what she sees as a fundamental flaw within herself.  The hero is someone you will not have any issues with as he is definitely swoonworthy in his devotion to the woman who captivated him from the start.

Let’s start with what I adore about Daniel:

Now let’s see what caused me to like Matilda *Tilda*:

Now…  the two people who I wish would fall off the face of the earth for what they did to a younger Matilda that made her in to the seemingly cold woman who believes something is wrong with her…  well I am not going to give them away here but trust that you will want to put them in a special spot in hell for what they did to her psyche when she was vulnerable.  This of course also causes Daniel some pain as we see but you’ll love his understanding of what is truly going on and admire how much he was able to let go as much as it hurt him to do so.  This is a man worthy of love and devotion which you’ll see he eventually gets from the one woman who completes him.

I adored this story and since the team at Berkeley are so generous…  I have a paperback copy of this one to give away to one lucky commenter.  All you need to do is tell me something about the person(s) that ground you.  We all have someone that has held that place in our heart that we know accepts us as we are…  Mine was my grandfather Sophus who I knew loved me as I was…  Leave a comment by 3/11/15 at 11:59 pm CT for a chance to win the paperback.